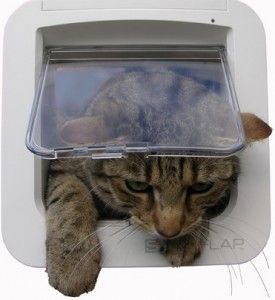 The Sureflap was the first microchip cat flap that we bought and we were so impressed with it that we felt inspired to produce this website. To enable us to speak with confidence about all microchip cat flaps, we also bought the competitor models and installed them in our utility door (yes, the neighbours think we are mad). We’ve had the Sureflap model for about 4 years now. The below blog post is our Sureflap microchip cat flap review.

The Sureflap microchip cat flap looks just like any other good-quality cat flap in existence, if not better. The plastics feel to be of good quality and they don’t tend to stain over time. The design is the most sleek, discreet and least-clunky on the market.

It fits into the standard-sized cat flap hole, which obviously is a big advantage. If you need to fit it to a glass door or through a wall then appropriate mounting adapters can be easily purchased and the instruction manual is simple to follow.

What many people aren’t aware of is that the Sureflap can also be bought in brown (see pictures here). While we went for the white version, the brown version doesn’t look tacky like many brown cat flaps can and I’m sure that it would actually look better than the white one in some scenarios. It’ll certainly hide the muck better! 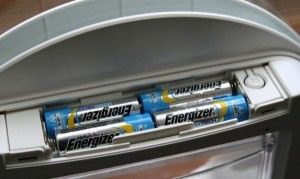 The Sureflap runs from four AA batteries, which are neatly positioned in the top of the model under a flap on the ‘inside’ half of it. According to the manufacturer, these will need to be replaced every 12 months. However, we have found that we are replacing the batteries after about eight months — but we have two cats, so maybe that’s what caused the discrepancy. You don’t need to worry about the batteries running out and locking your cat out, because there is an easy to read battery life indicator light that keeps you informed of the current power level.

We and many other customers have found the Sureflap microchip cat flap scanner to be extremely reliable, and the microchip in our cat has always been read quickly and successfully. Like the other models on the market, the range of the microchip scanner is quite short, but that’s to make sure that it’s only unlocking as your cat passes through. If the range was longer there would be a risk that other cats close by could use the cat flap.

As you’d expect, there’s a 4-way lock that works in conjunction with the microchip scanner and lock. This allows you to only let the cats in, let them out, lock the door completely or to let them pass either way.

To enter a cat into the cat flaps database you press the ‘M’ button under the cover that conceals the batteries and then allow your cat to pass through the door. It will scan your cats microchip as it passes through and that’s all you need to do for the cat flap to recognise your cat in future. The below video explains it in more detail.


The Sureflap Microchip Cat Flap can store the details of up to 32 different cats, so it’s a great excuse to acquire more cats! It also comes with a 3-year guarantee, so peace of mind is assured even though the reports suggest that you’ll never need it. 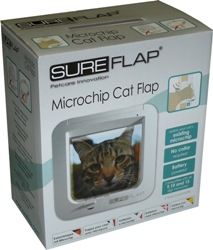 The final major plus point with the Sureflap microchip cat flap is the price. It’s about the same price as the competition and also comes with a 3-year warranty. Be careful not to overpay, we found a great deal at this shop. Top tip! That shop is MUCH cheaper than the manufacturers website!