The Ferplast Swing Microchip Cat Flap joins Cat Mate in trying to challenge Sureflap’s dominance over the microchip cat flap market. Ferplast are best known for producing accessories for hamsters and other small animals, so they don’t have a lot of pedigree in the market. It’s not cheap either — although it’s almost permanently on sale here. In our Ferplast Swing Microchip Cat Flap review we’ll discover if it’s worth buying over the other two models mentioned. 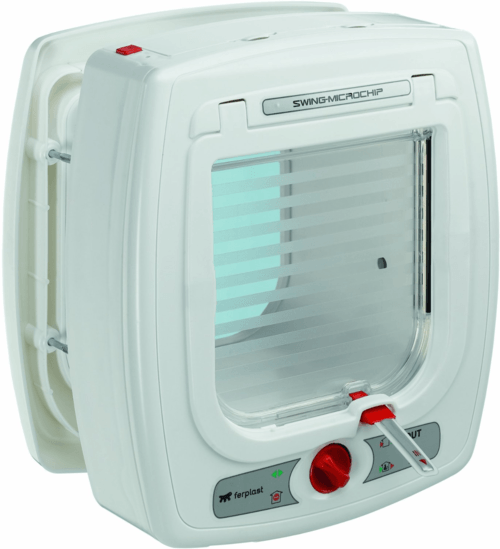 Scroll down for our Ferplast Swing Microchip Cat Flap review

This is a slightly harsh assessment, but in our opinion the Ferplast looks like a cat flap they’d use in ‘Back to the Future’ or some other 1980s sci-fi film. The tacky font, silver trim and bulky shape look like they could be taken from an ’80s robot. 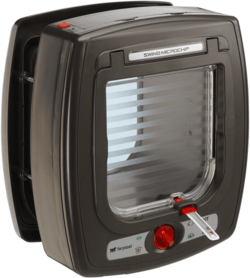 If you’d prefer the cat flap in a shade of brown rather than white then you’re in luck! At the time of writing the brown model is also considerably cheaper than the white version (click here to see it).

Fitting the Ferplast to a wooden door is just as easy as fitting any other cat flap. However, fitting the Ferplast microchip cat flap to a metal or glass door and walls doesn’t require any additional mounting adapters like most other models do, saving you some hard-earned cash. If the wall is over 55mm think, which would include the vast majority of exterior walls, then you’ll require a tunnel extender, just like any other cat flap. 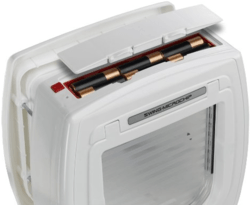 The good news is that unlike the PetSafe PetPorte, the Ferplast Microchip Cat Flap is battery powered. It takes six AA batteries, while the Cat Mate and Sureflap models take four, meaning it’s a little more expensive to run. Unfortunately we can’t tell you how long the batteries will last as ours haven’t run out yet and Ferplast don’t supply this information. Thankfully there’s a low battery indicator light that flashes once every five seconds should the batteries be running low. 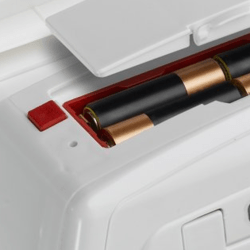 The machine makes recording your cats microchip number as simple as it could be… That’s not to say it’ll be easy to get your cat to walk through the flap on demand! Simply press the red button on the top of the unit and the machine will scan for microchips for 10 seconds. You’ll know if it’s read your cats microchip because you’ll hear the ‘click’ of the door unlocking. The memory can hold up to 32 cats, which is the joint-best on the market.

This red memory button is located on the outside of the appliance, which is unusual as normally they’re hidden beneath the battery flap. This is slightly worrying as the button could easily knocked inadvertently or by children. If you hold the button down for 10 seconds the memory will be wiped, so be wary of this happening by accident.

In case your cat hasn’t been microchipped yet, this model comes with a handy microchip collar that you can use instead. This is also useful for getting the knack of programming the microchip memory of the cat flap.

The microchip scanner seems as reliable as the best on the market. 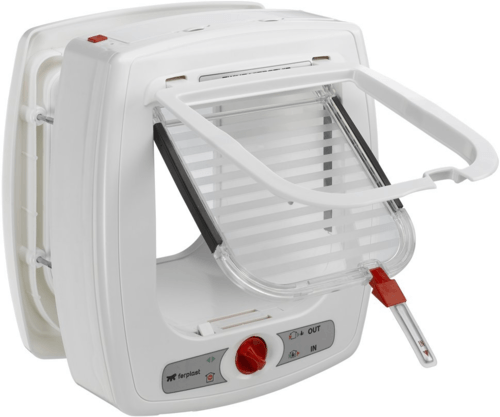 You can see the patented in/out indicator, 4-way lock and wind-stopper

There are two unique features on the model that are worth mentioning. Firstly the ‘wind-stopper system’ consists of a second outer flap that seals the gap between the clear swinging door and the body of the cat flap when the door is closed. This does a great job of stopping most of the draughts coming through the door. The second unique feature is the in/ out indicator. This is a strip of plastic that sits on the outside with the words ‘in’ written on it if the door last opened inwards. The strip of plastic sits inside the tunnel with the words ‘out’ written on it if the door last opened outwards. This is not totally fool-proof, for example your cat could pop its head through the door and then change its mind, but at least it gives you an indication of where they might be. Of course if you have more than one cat then it’s not as useful as it’ll only give you the location of the last cat to move through the door.

For the Ferplast to be purchased over the extremely popular Sureflap microchip cat flap it has to be significantly better. Unfortunately despite a couple of unique features we’re not sure we’d choose it. The RRP is a ridiculous £140.99, but you can get it for about half-price at this store.