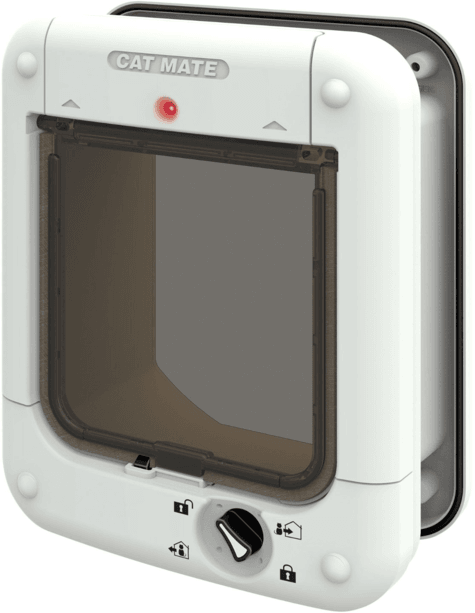 In our opinion this is the best-looking model on the market. The off-white plastics have a rugged look and feel, giving the unit a premium appearance. Now, at this price point you might expect it to have a quality look and feel, but typically in the market we see the same bodywork that appears on £10-£20 models, so this is a big plus point for Cat Mate.

It’s a slimline design too, protruding very little from the door on either side. This is great as there’s nothing more irritating than bruising your shins on a bulky cat flap and working it loose from the door at the same time.

Fitting the machine to a standard door up to 8.5cm thick is as simple a task as it could be. Should you be fitting the cat flap to a glass panel then you’ll need the mounting adapter, which has a decent rubber seal on both sides to stop draughts. If you’re fitting it to a wall then you’ll need both the mounting adapter and the tunnel extender. These are very expensive (see here) for bits of plastic and in all likelihood you’ll need to buy a few, as each one only bridges a 5cm gap. Unfortunately all of the manufacturers are overcharging for these tunnels, so there’s no way of escaping this added cost if the tunnel must be fitted to a wall. 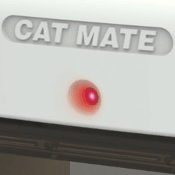 Thankfully, as opposed to the mains powered PetSafe Petporte the Cat Mate model runs on batteries. It takes 4 AA batteries, the same as its competitors and they claim that these should last for a year. I can’t tell you whether this claim is accurate as it has been out for less than a year, but first indications are positive. There’s a LED light that flashes red when the batteries are low on power, so there’s no risk of the batteries being drained and your cats being inadvertently locked out of the house; unless you’re very unobservant of course!

The Cat Mate microchip cat flap has the biggest inner dimensions for your cat to fit through of any of those we’ve measured, at a roomy 6 inches by 6 inches. The microchip reader doesn’t have a particularly large range. A cat has to be within roughly 6 inches of the door for you to hear the audible ‘click’ as the door unlocks. This is a positive feature, as if a strangers cat is in the vicinity you don’t want it to be able to sneak through just because your cat happened to be near the door. The good news is that while the range isn’t long, the reliability within the range for detecting microchips seems to be excellent (please let me know in the comments if you’ve had a bad experience with this!). 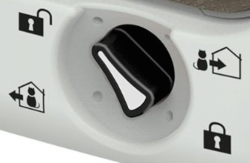 The 4-way lock is self explanatory thanks to the little images. Programming the machine to your cats individual microchip using the ‘program’ button under the battery cover is not difficult either. I’ve copied the below instructions straight from the manual:

The machine can store up to a maximum of 30 cats, slightly less than the 32 of the Sureflap model. This memory can be reset, so if in a few years you’re running out of space and some of the original cats have sadly passed away then you can programme it afresh with up to 30 new cats.

It’s still early days for the Cat Mate microchip cat flap. However, our review has found it to be a highly competent machine and one that will undoubtedly become increasingly popular over the coming years. As an added bonus it comes with a best-in-class 3-year guarantee. The best price we found was at this store, so check that out if you like and save yourself some pennies.